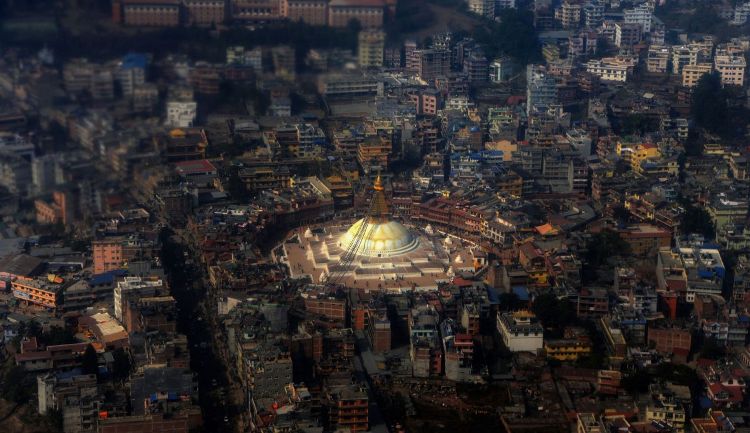 Kathmandu, the largest city of Nepal, is the political as well as cultural capital of the country. Kathmandu is a city where ancient traditions rub shoulders with the latest technological advances. Kathmandu has seen rapid expansion in the last decade, but despite the hustle and bustle so typical of metropolitan cities, its people remain as refreshingly friendly as ever. Retaining its ancient traditions, Kathmandu is blessed by a Living Goddess and is enriched by endless ceremonial processions and events that take to the streets every now and then with throngs of devotees seeking blessings

PASHUPATINATH TEMPLE (UNESCO World Heritage Site): Situated 5 km east of Kathmandu, the temple of Lord Shiva is considered one of the most sacred Hindu shrines in the world. The two-tiered pagoda with golden roofs and silver doors houses the sacred linga, or phallic symbol, of Lord Shiva. Chronicles indicate the temple existed before 400 A.D. Near the Pashupatinath Temple on the banks of the Bagmati River lies Guheswari, where, according to mythology, a portion of Sati Devi, Lord Shiva’s consort, fell when a grief-stricken Shiva wandered aimlessly across the earth carrying her dead body on his shoulders following her self-immolation.

BOUDDHANATH STUPA (UNESCO World Heritage Site): Maitidevi, Kathmandu, Nepal Website: www.sainonepal.com Email: info@sainonepal.com / sainonepal8@gmail.com / Skype: sainonepal8 The awesome structure of Bouddhanath is indeed inspiring. The 36-meter-high stupa of Bouddhanath is one of the largest stupas in South Asia. With countless monasteries surrounding it, Bouddhanath is the center of Tibetan Buddhism in Nepal. Built in the shape of a mandala designed to replicate the Gyangtse of Tibet, the stupa was renovated by Licchhavi rulers in the 8 th Century.

Nagarkot, located 32 kilometers east of Kathmandu, is one of the most scenic spots in Bhaktapur district and is renowned for its spectacular sunrise view of the Himalaya when the weather is clear. Visitors often travel to Nagarkot from Kathmandu to spend the night so that they can be there for the breathtaking sunrise.

BHAKTAPUR DURBAR SQUARE (UNESCO World Heritage Site): Among the three durbar squares, the Bhaktapur Durbar Square is by far the most elegant with its large open space facing south. The 15th century Palace of 55 Carved Windows and the palace entrance, the Golden Gate - a masterpiece in repousse art - has added splendor to this palace square which consists of buildings dating from the 13th century to the 18th century. The extraordinary Durbar Square with its extraordinary monuments reflects the glory days of the Malla dynasty when art and architecture thrived in the three cities of the valley. In front of the palace building are innumerable temples and architectural showpieces like the Lion Gate, the statue of King BhupatindraMalla mounted on a giant stone pillar and the Batsala Temple. There is a bronze bell on the terrace of the temple, which is also known as the Bell of Barking Dogs. Erected by King RanjitMalla in 1737.

3 Enjoy Morning And The Sunrise Over The Mountains

Enjoy Morning And The Sunrise Over The Mountains:

CITY TOUR: SWAYAMBHUNATH STUPA (UNESCO World Heritage Site): It is one of the holiest Buddhist Chaityas in Nepal. It is said to have evolved spontaneously when the valley was created out of a primordial lake more than 2,000 years ago According to translations from an inscription dating back to 460 A.D. This stupa is the oldest of its kind in Nepal and has numerous shrines and monasteries on its premises.

KATHMANDU DURBAR SQUARE (UNESCO World Heritage Site): Situated in the heart of old Kathmandu city at Basantapur, Kathmandu Durbar Square never fails to impress first time visitors with its ensemble of palaces, courtyards and temples built during the Malla period. The Durbar Square includes the Hanuman Dhoka Royal Palace, the historic seat of the royalty; the magnificent Taleju Temple towering more than 40 meters; KumariGhar, the residence of the Living Goddess, Kumari; Ashok Vinayak, also called Kathmandu Ganesh, a temple without a filial ; and KalBhairav, the God of Wrath. The capital takes its name from the giant pagoda of Kasthamandap, which is said to have been built out of a single tree. Since the time of the Malla kings, the Durbar Square has been the city’s social, religious and political focal point.

The prices are Inclusive of

The prices are Exclusive of

Please note, the names of hotels mentioned above only indicate that our rates have been based on usage of these hotels. It is not to be construed that accommodation is confirmed at these hotels until and unless we convey the confirmations to you on receipt of your acceptance. However in the event of any of the above mentioned hotels not becoming available at the time of initiating the reservations, we shall book alternate accommodation at a similar or next best available hotel and shall pass on the difference of rates (supplement/reduction whatever applicable) to you.