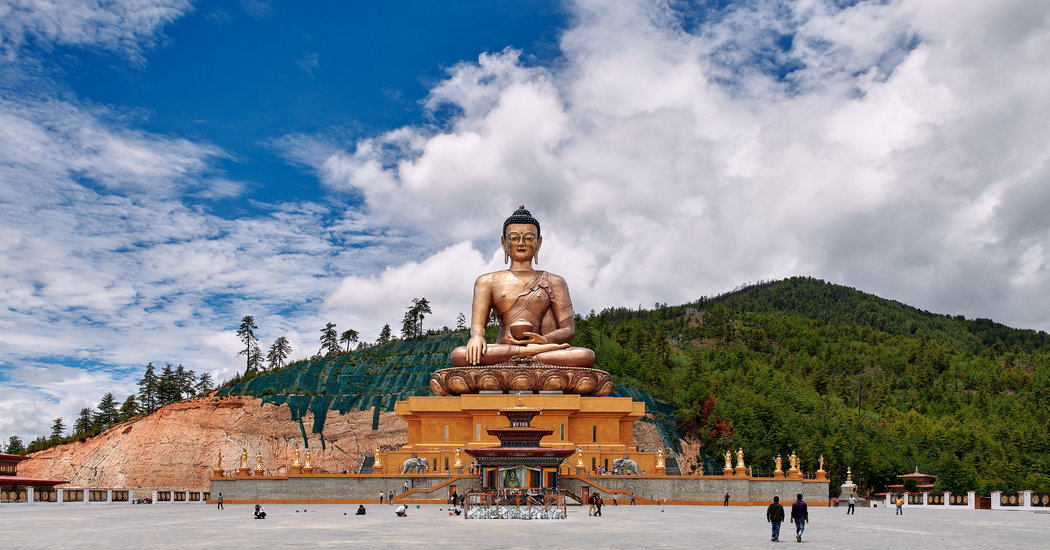 On arrival in Phuentsholing, met by our representative, after clearing immigration formalities, check in at the Hotel. Later in the day if time permits visit Zangtho Pelri: Situated in city centre, this small temple represents the heaven of Guru Rinpoche.

Later in the evening explore the local market.

Overnight at the hotel in Phuentsholing Proceed further to Thimphu. This entire drive is very pleasant with numerous scenic spots en route.

After breakfast drive to Thimphu. En route stop at Kharbandi Gompa, the beautiful monastery
situated in garden of tropical plants and flowers. The monastery contains paintings depicting scenes
from the life of Buddha and statues of Shabdrung Ngawang Namgyal and Guru Rimpoche . From the
monastery garden there is a splendid view of Phuentsholing and plains of West Bengal and their tea
gardens beyond.Proceed further to Thimphu. This entire drive is very pleasant with numerous scenic spots en route.
Lunch would be served at Bunakha cafeteria.
En route visit Simtokha Dzong, the place of profound tantric teaching, this dzong now houses a school
for the study of the Dzongkha language.
On arrival, in Thimphu check-into the hotel. The capital town of Bhutan and the centre of government,
religion and commerce, Thimphu is a unique city with unusual mixture of modern development
alongside ancient traditions. With the population of about 90,000 it is perhaps still the world’s only
capital city without a traffic light.
Evening an exploratory walk around Thimphu main street and market area..
Overnight at the hotel in Thimphu.

After breakfast, proceed for the guided tour of city’s main attractions that includes:
Textile Museum: is worth a visit to get to know the living national art of weaving.

Exhibitions
introduce the major weaving techniques, styles of local dress and textiles made by women and men.National Library: The history of Bhutan lies imprinted in archaic texts, which are preserved at the
National Library. Besides thousands of manuscripts and ancient texts, the library also has modern
academic books and printing blocks for prayer flags.
Institute for Zorig Chusum: Commonly known as Arts & Crafts School or Painting School, the
Institute offers a six-year course on the 13 traditional arts and crafts of Bhutan. On a visit, one can see
students learning the various skills taught at the school.
Simply Bhutan Museum: The newly commissioned museum depicts the ancient Bhutanese
architecture which is being lost to modernization. The uniqueness of the structure is in its
composition of the materials used. The structure is built reusing old timber, window and door frames
and other items from traditional and old demolished houses. The best part is the portrayal of the age-
old life styles of the Bhutanese people.
Lunch at city restaurant:

Lunch followed by city tour that includes:
Memorial Chorten: The stupa built in the memory of Bhutan's third King, His Late Majesty, King
Jigme Dorji Wangchuk, who is popularly regarded as Father of modern Bhutan. The paintings and
statues inside the monument provide a deep insight into Buddhist philosophy.
Buddha Point (Kuensel Phodrang). Located at a short drive from Thimphu city centre, visitors can get
a good overview of the Thimphu valley from the Buddha point (Kuensel Phodrang). You can pay your
obeisance and offer prayers to the Buddha, the largest statue in the country and then walk around and
take a glimpse of the valley.Conclude the tour of the day with a visit of Trashichhoedzong, “fortress of the glorious religion”. This is  the center of government and religion, site of monarch’s throne room and seat of Je Khenpo or Chief
Abbot. Built in 1641 by the political and religious unifier of Bhutan, Shabdrung Ngawang Namgyal, it
was reconstructed in 1960s in traditional Bhutanese manner, without nails or architectural plans.
Evening time can be spent strolling through the government-run Handicrafts Emporium and local
crafts bazaar, to browse through example of Bhutan's fine traditional arts. Here you can buy hand-
woven textiles, thangkha paintings, masks, ceramics, slate and wood carvings, jewelry, interesting
items made from local materials.
Overnight at the hotel in Thimphu.

After breakfast drive to Paro along scenic highway.
Later in the day after checking into hotel, proceed to visit Ta Dzong, originally built as Watchtower,
which now houses National Museum. The extensive collection includes antique thangkha paintings,
textiles, weapons & armour, household objects and a rich assortment of natural and historic artifacts.Ta Dzong visit immediately followed by short down the trail to visit Rinpung Dzong, meaning
(“fortress of the heap of jewels”), which has a long and fascinating history. Along the wooden galleries
lining the inner courtyard are fine wall paintings illustrating Buddhist lore such as four friends, the old
man of long life, the wheel of life, scenes from the life of Milarepa, Mount. Sumeru and other cosmic
Mandala.
After lunch, short drive to Drukgyel Dzong, a ruined fortress where Bhutanese warriors fought
Tibetan invaders centuries ago. The snowy dome of sacred Chomolhari, "mountain of goddess & can be
seen in all her glory from the approach road to the Dzong.

Along the way, visit the 7th century Kyichu Lhakhang, one of the 108 temples built in the Himalayas by
Tibetan King, Songtsen Gampo. The building of this temple marks the introduction of Buddhism in
Bhutan.
Overnight at the hotel in Paro.

After breakfast excursion to Taktshang Monastery (5hrs hike):  It is one of the most famous of
Bhutan’s monasteries, perched on the side of a cliff 900m above the Paro valley floor. It is said that
Guru Rinpoche arrived here on the back of a tigress and meditated at this monastery and hence it is
called ‘Tiger’s Nest’. This site has been recognised as a most sacred place and visited by Shabdrung
Ngawang Namgyal in 1646 and now visited by all Bhutanese at least once in their lifetime. On 19 April,
1998, a fire severely damaged the main structure of building but now this Bhutanese jewel has been
restored to its original splendour.Afternoon free for relaxation after long day hike.
Overnight at the hotel in Paro.

Drive to Phuentsholing towards the Indian border, where you will be picked up by Indian
representative for onward program.

The prices are Inclusive of

The prices are Exclusive of

From your Booking Date

Permit for Bhutan: Indian nationals do not require any visa for Bhutan. A permit will be issued at the entry point on production of a passport or Voter ID and 04 passport size photographs.

Restricted Area Permit for Punakha / Wangdue:
Restricted Area Permit is required to visit Punakha / Wangdue from Home Ministry of Bhutan. No charge will be applicable for this permit. Please bring 02 passport size photographs and Voter ID card or Passport of each person including child. This special permit is given only after guest has entered Bhutan. Permits are not issued on Saturday, Sunday & Govt. holidays.